Now in it’s fourth year, our annual concert with the New Music Brighton composer collective sees us perform an array of their miniatures alongside the UK premiere of Chaya Czernowin’s Ayre: Towed through plumes, thicket, asphalt, sawdust and hazardous air I shall not forget the sound of, alongside two of our call for scores commissions (Mirela Ivicevic and Sylvain Marty)
After the music, join us for food and drinks at the our afterparty at a nearby pub!

On 21st September at 7.30pm, the latest works by NMB composers will be blasting from the gates of the Friend’s Meeting House, wielded by the skillful hands and minds of Fraser Tannock (trumpet) and Terence Allbright (piano). To whet our appetite for this occasion, I caught up with Terry to answer a few questions about his musical life, past and present… 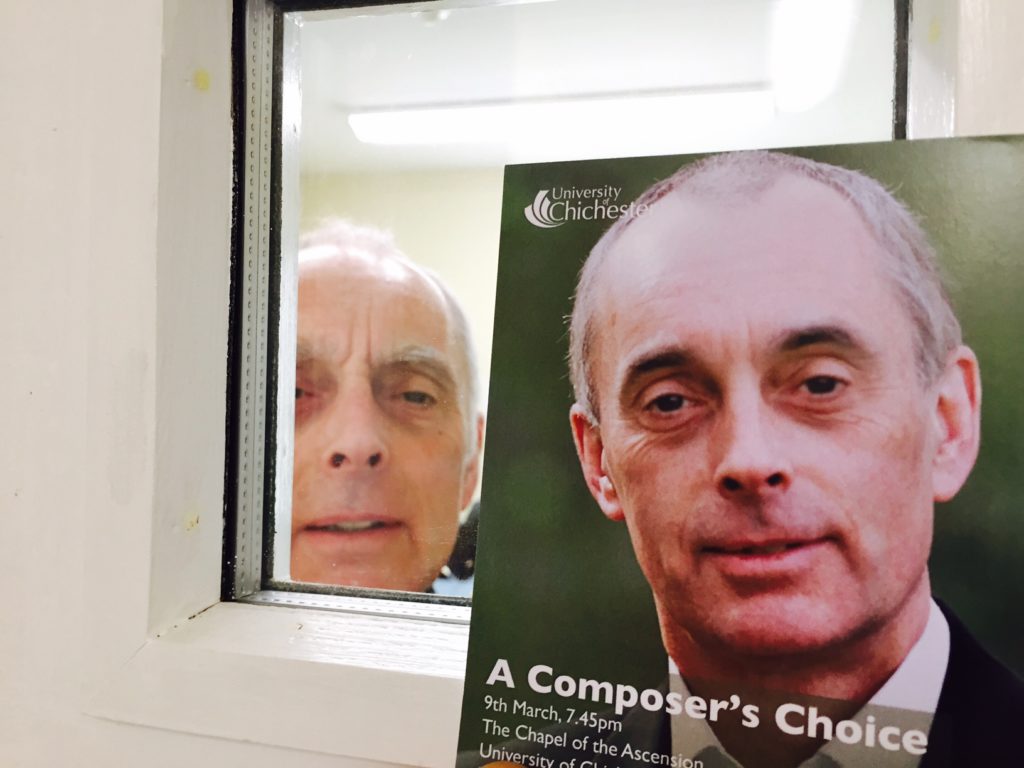 1 – Was there a decisive moment that caused music to become a central part of your life?

Not a moment, but the general situation: my mother played and as an infant (pre-5) I sang along and danced to her playing (often Chopin); and I improvised standing up when I was still too short to see the keys! Within a couple of years the unpredictable noise and violence that went on till I was 12 meant that the dining room – where the piano stood – was the safest place in the house.

2 – What music is on repeat in your car / in your brain at the moment?

In the car it’s Lata singing Bollywood songs; in my brain it’s usually what I’m learning (nmb trumpet & piano programme) – but I prefer it when it’s what I’m writing!

3 – How does your life as a performer inform your compositional practice, and vice versa?

It helps with practicalities, and accompanying must give me some familiarity with instrumental/vocal sounds. It’s developed my inner ear/inner voice, and made so much music available to me at the piano. But it’s also a nuisance because it takes up so much time.

4 – Who is making the most exciting sounds today?

Unsuk Chin’s Mannequin was the last new work to get me really excited. Pascal Dusapin’s Outscape was pretty good this summer, and so was Julian Anderson’s Piano Concerto; most other Proms new works this year were dismal. Much new stuff reminds me of Ravel’s remark about his Bolero: orchestral tissue without any music. For me this has been a summer of fantastic writers and artists: Colm Toibin, Sebastian Barry, Hari Kunzru – and the long-dead but mind-blowing Hokusai at the British Museum. Also, thanks to my friend Steven Frew, I’ve re-discovered the wonderful (also long-dead) Franco Donatoni.

5 – Do you have any upcoming projects that we should know about?

Medtner’s 1st Violin & Piano Sonata at Chichester Cathedral on October 31st, with the marvellous Sebastian Mueller. And I’m gradually turning last year’s and this year’s 90 second Riot Ensemble pieces into a set of 7 Snapshots. Maybe someone will play them all one day. Also writing Manga for bass clarinet & piano (for two unsuspecting friends!)

Terence Allbright was born in Northampton where he taught himself to play the piano and to compose; later he studied piano in London with John Bigg and composition at Cambridge with oriental musicologist Laurence Picken.
While he was a student at the RCM, theatre and radio drama director Ian Cotterell heard his piano pieces and commissioned incidental music for a production of A Midsummer Night’s Dream at the Ashcroft Theatre in Croydon. This led to work in BBC Radio Drama, composing and/or playing and directing the music for more than fifty plays for Radios Three and Four.
During that time his piano and chamber works were performed at venues including The Purcell Room and Wigmore Hall, but after a Magnificat commissioned for Chesterfield Parish Church (for soprano, 3 choirs, organ and double brass ensemble) Terence felt deeply dissatisfied with his own music and discarded all of it up to that time. During the following 12 years he composed almost nothing, and devoted more time to performing’
Since 1996 he has been composing continuously – piano pieces, chamber music, songs, ensemble and choral works including commissions for the Petworth Town Band, Wells Cathedral Choir, The Sutton and Bignor Singers, Fernhurst Choral Society, and Chichester String Ensemble.