Our first concert of 2013 at the Friends’ Meeting House

New Music Brighton is pleased to announce our first concert of 2013 at the Friends Meeting House on 2 March 2013 at 7.30pm . This concert is a fundraising event for NMB and will consist of a rare performance of Erik Satie’s Vexations performed by a relay of pianists, an improvisatory piece called Tides of C and performed by Steve Gardiner and Phil Baker’s composition Pathways to the C… performed by the Skeleton Ensemble.

Erik Satie’s Vexations was never performed in his lifetime but was written at the end of his affair with trapeze artist and artist’s model Susanne Valadon. The Satie/Valadon affair was intense and brief, ending nastily after some six months in June 1893. Vexations dates from the time of their break up and it ended either because he called the police on her or pushed her out of a window depending on which version of the story he was telling at the time. Vexations is:

…a short composition for piano lasting a mere thirteen bars, which Satie indicated should be repeated a deadening 840 times. Vexing not only due to its repetitious nature and extreme length, the piece features built-in annoyances for the performer in its persistent enharmonic spellings, atonal harmonies and asymmetrical phrase structures, all of which undercut efforts to retain the music in memory. This seems to have been Satie’s expressive outlet for the frustration he felt in the wake of this failed and often tempestuous affair with Valadon, which in any event was definitive…

NMB are performing an abridged version of the piece as a complete performance can take anywhere between 18 and 24 hours to complete. It has been performed before, most notably by John Cage, and has been regarded as one of the first modernist pieces.

Our second piece Tides of C by Steve Gardiner is an extended improvisation for solo piano, ‘This piece fuses together Eastern and Western sounds’, says Steve. ‘The listener will be able to experience the piece in a variety of ways; as a meditation on C, an Indian raag, a minimalist piece, a celebration of the incoming and outgoing tide. I like producing music which can lead listeners to a deeper place, where they can feel relaxed, inspired and energised at the same time. I believe I have found a way of playing which achieves this.’

Our third piece is Phil Baker’s Pathways to the C … performed by The Skeleton Ensemble.

Phil Baker writes “I rarely venture in to the world of improvisation or ‘chance music’ but have done so with two pieces: one, Library Hollers for performance at the newly built Jubilee Library and the piece being given at the New Music Brighton fundraising concert at The Friends’ Centre on March 2nd, entitled Pathways to the C… Here, the pun is very definitely intended as the piece works like a series of musical walks each of which ends when it finds its way to the C/sea. Get it? The piece gives wide scope for individual and group improvisations and is played on this occasion by the composer Phil Baker, Ric Graebner, Patrick Harrex (viola), Roger Harmar (amplified bass), Tim Willsone (oboe/flute) and Helen Glavin (vocals). The work offers surprises for both performers and audience alike and is entirely unpredictable ..but, what isn’t?” 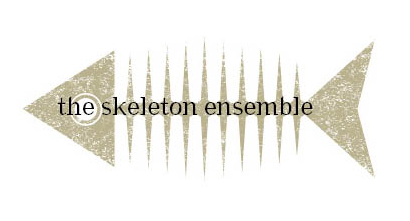