I am a multimedia designer and composer, and use electronics and computers to compose and perform my music. I’m interested in the link between sound and vision so most of my composition has a visuals element running through it. I discovered Miles Davis, Ornette Coleman and Sun Ra at an early age and switched from playing violin to playing bass. I’ve been in many bands and have played on commercial recordings. My music is frequently played on SomaFM’s Sonic Universe and I am still attemping to get my solo CD/digital album out which will emerge eventually.

The first piece I wrote specifically for an NMB concert is asusu which is based upon verbs found in an Indian language called Boro, it has long time cycles and is polyrhythmic. The last section called ongaboy features the beautiful singing of Sandhya Sanjana.

±.pattern.time.memory continues my fascination with long rhythmic cycles. This piece develops in cycles of 60 beats which gives a simple mathematical and musical foundation for its polyrhythms. Its polyrhythmic nature is most obvious in the final part, memory. Melodically the piece uses an artificial 7 note scale and has been unconsciously influenced by half-remembered music of the early 20th century. The video images contain archive footage, vj loops and patterns inspired by the music and has special guest appearances by Erik Satie and Francis Picabia.

pattern.time.memory from Roger Harmar on Vimeo.

nailing paintings together was originally written and drawn for the Soundwaves Festival in Brighton. A graphic score for All the creators event it has since gained a life of its own and had a number of performances in Lewes, Worthing and Chichester performed by Sussex CoMa. Here’s a performance from CoMa directed by Adam Swayne in Worthing. 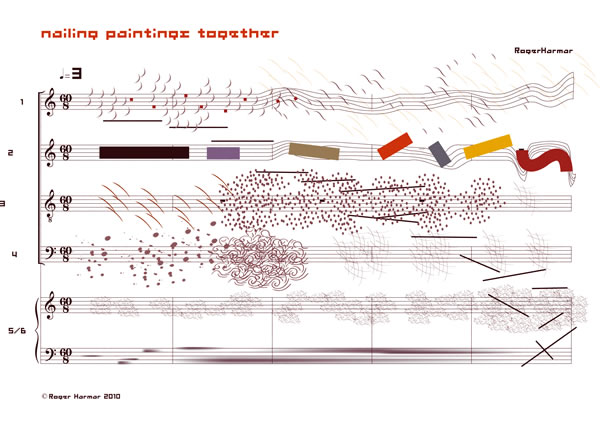 nailing paintings together from Roger Harmar on Vimeo.

More of my graphic & multimedia work can be found at my website www.rogerharmar.net